My love of film noir has roots in my childhood (detective fiction, Charlie Chan films) and college (film societies, first hardboiled fiction), but it really blossomed with my discovery of the Film Noir Foundation and their annual NOIR CITY festival in San Francisco every January (into February).

My second trip to NOIR CITY (2015) inspired my first posts about film noir. During that trip, I “live-blogged” on Facebook the various connections between the films I was seeing and the Fox Charlie Chan films of 1935-42. Those connections became a three-part series in January 2017.

Charlie Chan and Film Noir I

One month later, I offered a statistical “critique” of the 2017 NOIR CITY.

In April, I wrote, tongue firmly embedded in cheek, about how the movie Nora Prentiss made me appreciate our eldest daughter’s birthday even more.

Less than one month later, however, I would write a life-changing post–and begin to interrogate memory.

The impetus for my post of May 18, 2017 was almost certainly my “commencement” from Boston University School of Public Health with my doctorate in epidemiology. I used quotation marks in the previous sentence because I skipped the official ceremony (bad blood with my doctoral committee) in lieu of a far less formal ceremony in our Brookline apartment.

The upshot, however, was that I was now free to remove all of the epidemiology texts, folders and papers from the small wooden bookcase to the right of my desk and replace with my rapidly expanding film noir library. 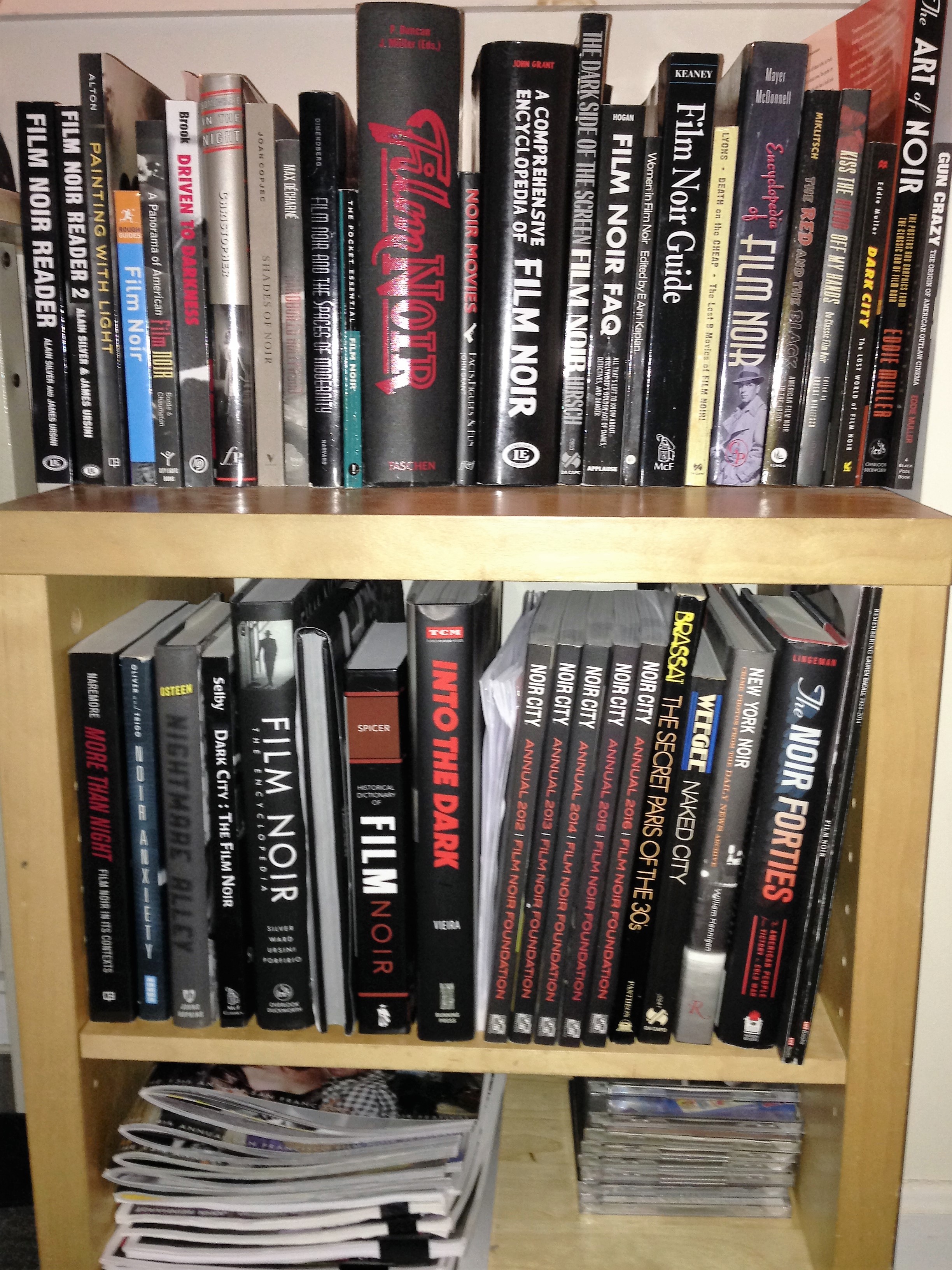 It has grown even larger since then.

I had also been working on my comprehensive film noir database since for more than two years—and it had grown to over 4,800 titles.

In an attempt to lay the groundwork for analyses of that database—and because I was tired of being asked why I loved film noir so much…only to respond with the verbal equivalent of a shrug—I wrote Film Noir: A Personal Journey.

This was one of my first posts to gain more than a few dozen readers—ultimately becoming the first to crack 100 views (121 and counting; cut me some slack, this is a very eclectic website).

More importantly, two months later, when my exasperated wife Nell asked (in the middle of a literal kitchen table conversation about ways I could earn income), “Why don’t you write a book?”…

…it was this post that occurred to me–and the outline of a book popped into my head, fully formed.

But that is a topic for a later organizational post.

I would not write again about film noir until February 11, 2018, about a week after returning from my fifth consecutive trip to NOIR CITY.

As I was preparing to fly to San Francisco, I had a vague notion I would write a sort of travelogue of my trip when I returned. To that end, I packed a small black faux-leather notebook in which I took copious notes of my 11 days there (to go along with dozens of iPhone photographs).

But what I thought would be three, maybe four posts tops, turned into an 11-post epic…well, 10 if you exclude this quantitative analysis of the festival. Perhaps I will turn these 30,000-odd words into some sort of book one day.

Since then, I have written little about film noir, other than to note a connection with The Smithereens and to discuss some books (and, more tangentially, some other books) I love.

In March 2019, I wrote about my decision not to attend NOIR CITY 17, while updating my quantitative analysis of the festival.

Inspired by Noir Alley’s March Badness on Twitter, I searched for the worst character in neo-noir in May 2021:

And The Winner Is…