The streak ended at five.

For a number of reasons (including having already seen 20 of the 24 films to be screened[1]), I did not attend the NOIR CITY film festival in San Francisco this year[2]. I had attended—and enjoyed immensely—each of the previous five years after attending the 2014 festival (NOIR CITY 12) on a lark.

After returning home to Brookline from the 2018 festival (NOIR CITY 16), I wrote a 10-part series detailing my extraordinary 11-day trip. You may find all 10 parts towards the end of this recent post.

I also wrote a post in which I observed that the “noir” level of the festival had increased dramatically since the relatively low-level heist-themed NOIR CITY 15 in 2017. By “noir level,” I simply mean the degree to which the films screened at the festival are considered noir by a range of published experts in the field (including being screened at NOIR CITY).

Briefly, since March 2015 I have been constructing an Excel database, which currently consists of 4,825 films discussed, explicitly[3] or implicitly[4], as “film noir” in at least one of 32 publicly-available sources (minimum 120 titles). For each film, I entered all alternate titles, release details (year, format, BW/color, primary production studio), director(s), cinematographer(s) and country(ies) of production. I have also recorded the top-billed (up to 10) actors and actresses (separately by gender) in the 300 films most often considered noir, according to that film’s entry in the Internet Movie Database (IMDb). I supplemented these “master” lists with a) sub-lists in the 32 primary sources (e.g., the 50-film canon in Ballinger’s and Graydon’s The Rough Guide to Film Noir) and b) 13 shorter lists (25-119 titles), including the 77 films discussed as noir in Paul Schrader’s seminal 1972 essay “Notes on Film Noir[5].”

From these data I calculated two measures:

Let me be very clear: I am NOT saying that films with higher LISTS/POINTS scores are intrinsically more “noir” than films with lower LISTS/POINTS scores. That would require a consensus definition that does not yet exist[8]. Instead, I simply observe that the higher the LISTS/POINTS score, the higher the level of consensus that a particular title is film noir, because more writers who have examined these films have denoted it as such, however indirectly. That said, only 11% of films in the database have as many as 12.0 POINTS, while only an additional 9% have between 5.5 and 11.5 POINTS. The former I label “Universal,” the latter I label “Debatable,” and the other 80% of films (including 2,327—fully 48%–with only 1.0 POINTS) I label “Idiosyncratic.”

Since its inception in 2003, a total of 346 films have been screened at NOIR CITY, primarily at the magnificent Castro Theatre, with 64 screened multiple times; the entertaining Night Editor has been screened four times[9]! These 346 films average 16.4 LISTS and 20.1 POINTS (with medians of 18 and 19, respectively); by comparison, the overall database average is 4.0 LISTS and 4.5 LISTS (both medians=2). 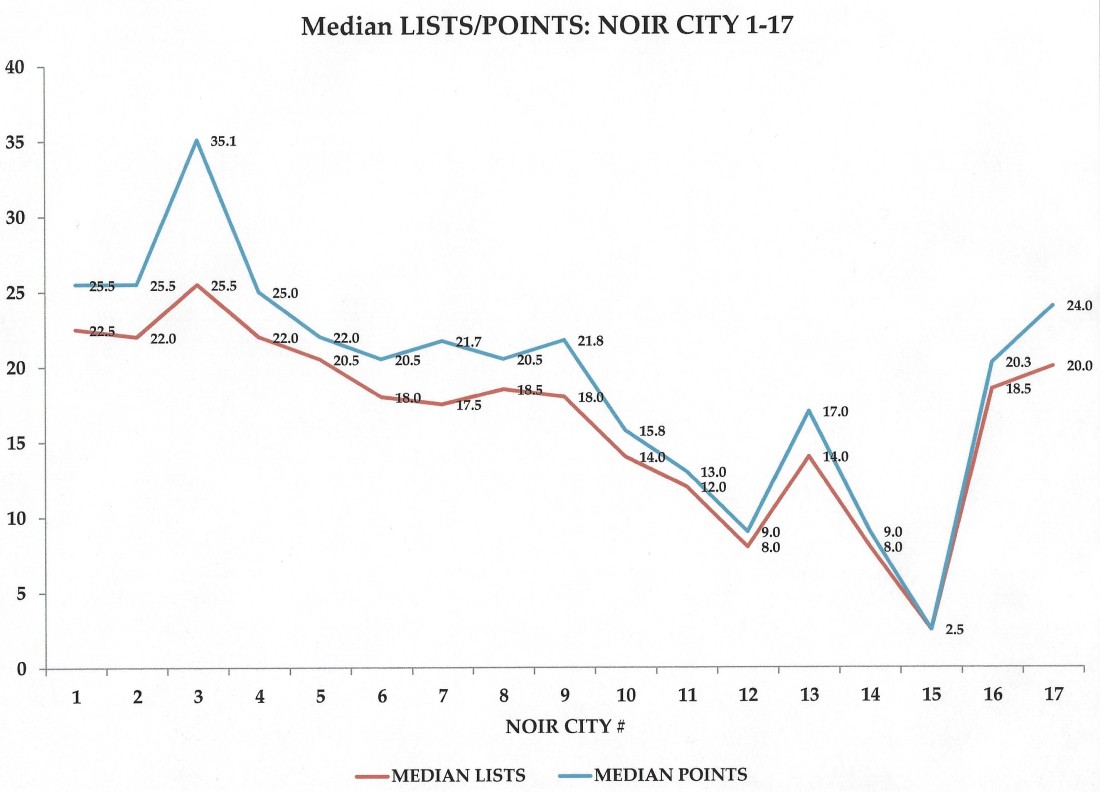 NOIR CITY is scheduled to return for a second year to the Brattle Theatre in Cambridge, MA on June 7, 2019; I will definitely be attending, likely with one or both daughters in tow (less certain of my wife Nell). As of this writing, I do not know which, if any, of the 24 films screened in San Francisco will be screened at the Brattle, though I hope the 10 films include at least one of the four films I still have not seen[11].

As for the yet-to-be-scheduled NOIR CITY 18: as of now I am planning to attend. Stay tuned.

Until next time…please wear a mask as necessary to protect yourself and others – and if you have not already done so, get vaccinated against COVID-19! And if you like what you read on this website, please consider making a donation. Thank you.

[1] In the previous five years, I typically had already seen only eight of the average 25 films to be screened.

[2] Also, the previous five years the “official” NOIR CITY hotel was closer to Union Square. Due to renovation, this year the “official” hotel was a few blocks from the Castro Theatre. While that is a fun neighborhood, half of the fun of these trips is being a short walk from Chinatown and other “downtown” sites. This made it that much harder to justify the time and expense of an 11-day trip some 3,000 miles to the west.

[4] Cited in the text, however obliquely, in such overviews as Foster Hirsch’s The Dark Side of the Screen: Film Noir, Eddie Muller’s Dark City: The Lost World of Film Noir and The Art of Noir: The Posters and Graphics from the Classic Era of Film Noir, and James Naremore’s More Than Night: Film Noir in its Contexts.

[8] In fact, one goal in constructing this list is to single out the films most-often cited as “noir” then examine those films for commonalities from which a formal definition could be constructed.

[10] I subtracted one LIST and one POINT from each screened film because appearance at NOIR CITY is one of the primary sources. Simply add one to each value to calculate each year’s actual LISTS and POINTS average and median.