I have previously described how I manipulate mix tape/CD/iTunes playlist data to generate lists of favorite tracks (a term I prefer to “songs”), albums and artists, organized by year, musical “genre,” etc.

Being a meticulous (obsessive, even) organizer of data, no sooner had I started using my current version of iTunes in January 2013 (when my track play counts start) then I embarked on a massive data cleaning project: guaranteeing every track (n=9,552 as of March 6, 2018) had the correct title and artist name; release mode[1], track number, year and cover art; and musical classification (first-listed “Genre” on its Wikipedia page or “Style” on its AllMusic page).

I completed this project (New Order’s 24 tracks were last to be scrubbed) within a year. Since then, every newly-acquired track has undergone the same treatment.

Periodically, however, iTunes reverts all of an artist’s tracks (e.g., Blondie, n=31) to their original information, requiring me to re-clean them.

A short drive from our Brookline home is the terrific independent bookstore Newtonville Books.

A small windowless room in the rear of the store houses books (“chapter books” our daughters call them) for tweens and young adults. Hanging on the wall of this room are two wall charts depicting a statistical overview of the 2004 and 2007 Boston Red Sox seasons (they won their first World Series in 86 years in 2004, repeating the feat just three years later). Each chart’s X-axis is day of the season, while its Y-axis features a range of values (player batting averages, pitcher earned run averages, win total, inter alia). The visual effect is stunning.

Inspired by these innovative visuals, I decided to attempt something similar with my iTunes data.

Specifically, I wanted to create a chart using Excel that has year on the X-axis, with artist (≥20 tracks AND ≥100 total plays [76 of 1,311 artists[2]], ≥10 tracks if first release before 1950) and genre (all other tracks) on the Y-axis. Cells would contain the number of tracks released by that artist/in that genre in a given year, with a black border around each value ≥10; the font-size would increase from Palatino Linotype 12 in increments of 10. Artists/genres would be sorted, in ascending order, by year of first release. Color-coded cells on the far left-hand side would contain artist/genre name (e.g., “Progressive Rock” shaded “Aqua, Accent 5, Darker 25%,” writing “White, Background 1, Darker 25%); font size would also increase with track total.

I began this project in May 2014, abandoning it the next month. Recently, though, I worked out a faster way to generate the necessary cell entries using the statistical software program SPSS.

Once I finish the chart (watch this space!) I originally envisioned, I will construct a second chart using total plays, a strongly-related (correlation = +0.81), more valid representation of artist/genre fondness.

First, the incorrect year was assigned to Olivia Newton-John’s “Xanadu.”[3]

Two, I questioned the genre assignment “Rock/Metal” for The Smithereens’ song “Miles From Nowhere.”

While I first heard The Smithereens listening incessantly to the now-defunct Boston alternative rock station WFNX (101.7 FM) between 1991 and 1996, they did not truly register in my musical consciousness until I bought Sedated in the 80s, No. 3 in the late spring of 1997.

Track 3, the hypnotic “Blood and Roses,” so caught my ear that in July 1997 it became the first Smithereens track to appear on one of my artfully-constructed mixes. By September, I had succumbed[4] by purchasing the 16-trackbest-of CD Blown to Smithereens: Best of the Smithereens—which deserves its status as an AllMusic “Album Pick.” Three more Smithereens tracks debuted on a mix that same month.

But that was that…until 2004, when I began to watch The Alternative.

Trunk and his guests kibitzed between videos, including five or six for Smithereens songs. After watching this episode, I dusted off my Blown to Smithereens CD, and I have not really put it back since.

In the spring of 2009, I acquired a free vinyl copy[5] of their excellent 1988 Green Thoughts. The soul-searing “Especially For You,” the last track on side one, is one of only 27 tracks to have 50 or more plays.

The Wikipedia page for 1994’s A Date With the Smithereens—the album on which “Miles From Nowhere” first appeared—does, in fact, list “Rock/Metal” as its genre. However, on the page for the song itself, the listed genres are “Power Pop” and “Alternative Rock.”

I opted for “Power Pop” and immediately updated my iTunes data.

The story would have ended there, except—as will happen with Wikipedia—I started clicking around other pages.

One page was for the band itself. Toward the end of the too-brief history of the band was this sentence:

The footnote for this sentence linked to this poignant New York Times obituary.

What the bleepity-frick?!? How had I missed this?

In five trips to NOIR CITY, only in 2016 did I need to leave early.

The very next film I would have seen that late-January Monday was the 1950 Nicholas-Ray-directed masterpiece In a Lonely Place (followed by The Two Mrs. Carrolls—it was “Humphrey Bogart: Artist” night).

In a key moment, Bogart’s Dixon Steele recites to Gloria Grahame’s apprehensive Laurel Gray some doggerel he wants to include in the screenplay he is writing:

“I was born when she kissed me. I died when she left me. I lived a few weeks while she loved me.”

One of the first Smithereens tracks I played after learning that the charismatic DiNizio had died was a haunting number (featuring back-up vocals from an up-and-coming singer-songwriter named Suzanne Vega) from their masterful 1986 full-length debut Especially For You.

“In a Lonely Place.”

I had known the song since 1997, so it was a definite “ohhh—that’s where that came from” moment when I first saw the film—and that scene, specifically—about five years later.

Did I mention the song’s refrain is:

I was born the day I met you/

Lived awhile when you loved me/

Died a little when we broke apart.

Twice in the song, the next lyrics are:

Yesterday, it would have mattered/

All my hopes and dreams are shattered now.

These lines strongly echo dialogue from the film’s climactic scene.

As if to hammer home the point, the video for “Lonely Place”—featuring a beatnik DiNizio and a pixie-like Vega—is photographed in moody black and white, making it, visually at least, a kind of contemporary Greenwich village noir (photograph from here). 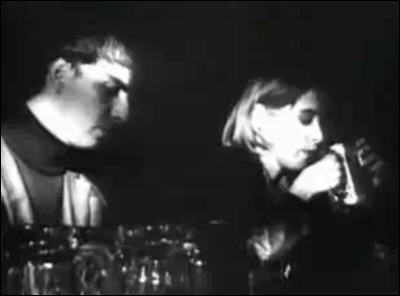 Other, more oblique film noir allusions may be found in the Smithereens’ catalog.

The high-intensity rocker “Behind the Wall of Sleep,” also from Especially For You, includes this pithy encapsulation of the lures of a femme fatale:

She was tall and cool and pretty/

And she dressed as black as coal/

If she asked me to, I’d murder/

I would gladly lose my soul.

Two years later, Green Thoughts would feature the melancholy “Deep Black” (could there be a more noir title?) and the shimmering “Spellbound,” which could easily be a reference to the 1945 film noir directed by Alfred-Hitchcock.

Finally, there is “Top of the Pops” from 1991’s Blow Up which includes the lyrics:

We were ready to swing.

I cannot hear that lyric without thinking of The Bride Wore Black, the 1946 noir novel written by psychological suspense maven Cornell Woolrich and filmed by Francois Truffaut as La Marieé Etait en Noir in 1968.

The video for “Top of the Pops,” in which the band appears in various Atlantic City locales, has some distinctly noir flourishes, particularly the black-and-white 1940s sequence in which a bathing beauty poses for members of the press nattily attired in trench coats and fedoras.

I freely admit that, beyond the pointed homage to In a Lonely Place, I may simply be imposing my own noir sensibilities onto The Smithereens.

Or there may be even more noir allusions I have missed—yet one more reason to keep playing their music.

[1] Almost always a full-length album or extended play (33 rpm), though it could also be a single (45 rpm) or even simply when the song was written or recorded (as with older classical pieces, or jazz and blues sides).

[2] This is using the exact artist credited to a track. Eventually, I will collapse these artists into meta-artists. For example, “Bob Seger” (8 tracks. 14 plays), “Bob Seger and the Silver Bullet Band” (23, 106) and “Bob Seger System” (1,5) will all be considered “Bob Seger+”

[3] The movie may be a hot mess, but the soundtrack is worth a listen.

[4] I have a memory of seeing videos for tracks like “A Girl Like You” and “House We Used To Live In”, but I cannot imagine where that would have been.

4 thoughts on “The Smithereens: Film Noir where you least expect it”