On Wednesday, March 25, 2020, Massachusetts Governor Charlie Baker issued an executive order extending the closure of all public schools in the Commonwealth until at least May 4, 2020.

In four previous posts (I, II, III, IV), I described how my wife Nell, our two daughters—one in 4th grade and one in 6th grade—and I were already coping with social distancing and the closure of the public schools in Brookline, Massachusetts until at least April 7, 2020. Besides staying inside as much as possible, we converted our dining room into a functioning classroom complete with workbooks, flip charts and a very popular white board.

To give our daughters something of a break during the week—especially our younger daughter, who has a yet-to-be-formally-diagnosed learning disability and attention deficit disorder—there is no “school” on Wednesday mornings. This means that when I came downstairs on March 25, 2020, Nell had not written a daily schedule on the flip chart. This likely saddened our younger daughter who was apparently going to have free reign over what the afternoon classes would be called.

To be fair, the girls had done something broadly educational that morning. With Nell, they had watched and discussed two episodes of The Blue Planet.

And they are continuing to produce drawings at a solid clip. 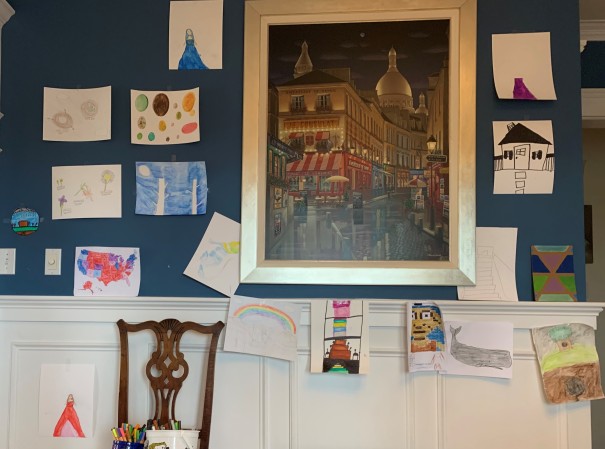 The framed painting in the middle is one of two I bought when I first moved back to the Boston area—Waltham, to be precise—from my native Philadelphia in early September 2005. I do not recall why I entered the Martin Lawrence Galleries on Newbury Street (which appears recently to have closed), but once inside I was quite taken with a collection of paintings by Liudmila Kondakova. Using funds from a recent inheritance, I bought this painting and a smaller one. Both depict Paris street scenes, and both have my last name written somewhere in them.

The break from school work does not extend to the afternoons, so we convened just after 2:45 pm to discuss the history of the American presidential nominating system. My attached notes for this class were a bit more scattershot than usual, but they worked well enough to tell a series of what I hoped would be interesting stories.

I noted in “Dispatch IV” our daughters’ penchant for assigning monikers to historical figures. Well, they came close to doing that when I came to the 1960 Democratic nomination process, and I explained one of the primary contenders that year was United States Senator (“Senator”) Hubert Humphrey of Minnesota.

“Who names a kid ‘Hubert?” asked our older daughter. “Did his parents want him to get teased his whole life?”

After observing his middle name was Horatio—he was once erroneously referred to as Hubert Horatio Hornblower—I defended the late Vice President as a good and honorable man, though I never did get around to discussing his groundbreaking speech on civil rights at the 1948 Democratic national convention.

We concluded with a rapid-fire discussion of how Democrats—proportionally, with a minimum of 15% statewide or in a Congressional district—and Republicans—mostly winner-take-all—differ in the way they apportion nominating convention delegates.

This was followed by easily the most cringeworthy moment I have thus far endured as a parent.

I had been talking about the role “expectations” play in the modern primary and caucus system, One example I used was the way then-Arkansas Governor Bill Clinton used a 2nd place finish in the 1992 New Hampshire Democratic Primary to label himself “The Comeback Kid.”

They had been vaguely aware of Clinton’s marital indiscretions, and they understood he had been impeached for lying under oath about cheating on his wife while he was president of the United States. What they did not know, though, were the sordid details.

And they very much wanted to know what they are; they essentially promised to hear the end of my spiel in exchange.

So…after pouring myself a fresh cup of hot black coffee, half-decaffeinated to brace myself…I told them.

…at which our older daughter interjected, “Oooo, gross! He peed through that! Why would anyone ever want to do that?!?”—or words broadly to that effect. Our younger daughter, meanwhile, just sat quietly, listening.

They particularly wanted to know why Ms. Lewinsky had kept that dress.

“Well, Clinton kept lying about what they had done. So she kept it as proof.”

And that was that.

At just after 4:45 pm, we reconvened for what I had thought would be the most fun part of the afternoon.

I wanted to talk about random sampling—the idea that you could get, for example, a fairly accurate impression of the distribution of attitudes in a very large population by randomly identifying a much smaller proportion of that population. However, I should have known that things would go awry when I used this example: a group of one million people includes 750,000 (75%) who prefer chocolate ice cream and 250,000 (25%) who prefer vanilla ice cream. Rather than ask every one of those people which flavor they prefer one could simply randomly select 1,000 of them to ask. Most of the time, if you sample properly, you will come within a few percentages either way of 75 and 25.

Well, our younger daughter simply wasn’t having it.

I explained this was merely an example, but that did not work.

“It is a forced choice,” I weakly noted.

At this point, her sister chimed in.

“Well, which one do you prefer?”

This led to a long pause which ended in a non-answer.

At this point, I simply began talking about the activity we were about to do, one that involved 100 carefully selected cards from an UNO deck.

What I wanted to do was illustrate how queried multiple random samples from an identical population will center around “true” values within that population. My original conception was to put something like 60 blue and 40 red of the same small objects into a hat—Nell’s grandfather’s top hat lives in my home office—and have them draw 15 balls from that hat 10 times. We would record those draws to see how close they came to 60% blue and 40% red in the aggregate.

Of course, we did not have quite the objects I was envisioning, and I did not really want to cut up small bits of blue- and red-colored paper. That was when I remembered our bedraggled deck of UNO cards. There were enough cards remaining for me to compile a deck of 100 cards:

What I had not counted on was just how hard it is to shuffle—and I mean really, properly, thoroughly shuffle—a deck of 100 cards. Thus, what I thought would be a fun exercise where the girls alternated which one drew 15 cards and which one tallied the colors on the white board quickly devolved into a “why is this taking so long?” battle of long stretches of card shuffling, slow drawing and slower tallying.

Perhaps I was still reacting to the news we would be home schooling five weeks longer than we had anticipated. Perhaps I was overtired—this is more exhausting than I had expected. Or perhaps I was mad at myself for choosing an overly-thick deck of cards I could not properly “randomize.”

Whatever the reason, I snapped multiple times at both daughters, making the older one huffy and the younger one teary. I apologized—again; Nell, who taught elementary school for more than a decade, gently pointed out this is why you do not teach children “at 5:30…they are toast.”

For all the drama, however, we managed to draw 15 sets of cards. As you see, the results were not what I had anticipated. The 21 yellow cards kept making a disproportionate appearance. 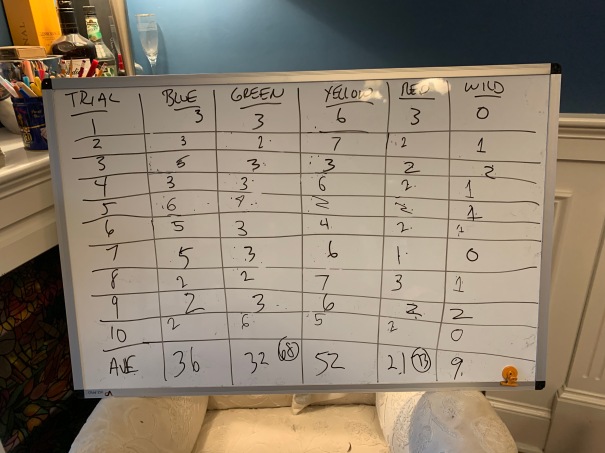 Here is a graphical representation of the results. Had I not counted the cards very carefully, I would almost think I simply had the “true” totals reversed; it is more likely simply very difficult properly to shuffle a double-deck of cards…and that randomness does not guarantee anything.

Even teachers have things to learn from their own lessons.

Until next time…please stay safe and healthy…

One thought on “Dispatches from Brookline: Home Schooling and Social Distancing V”