In a previous post, I described how my wife Nell, our two daughters and I were coping with social distancing and the closure of the public schools in Brookline, Massachusetts until at least April 3, 2020. Other than staying inside as much as possible, we converted our dining room into a functioning classroom complete with workbooks, flip charts and a very popular white board. 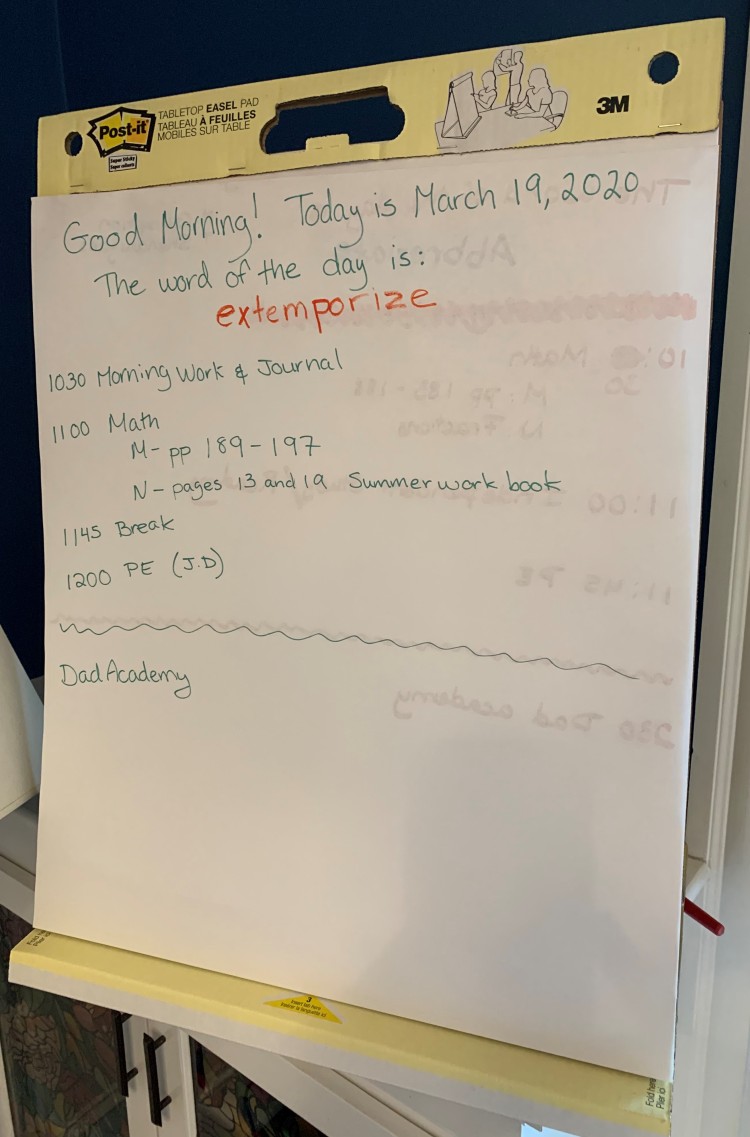 Unlike the previous day, our daughters had a much smoother morning. Nell set up the video game Just Dance on the big screen HD television in our living room, which was particularly good for our 6th-grade daughter, who requires a great deal of regular physical activity. Our 4th-grade daughter would generally prefer to sit quietly in a darkened bedroom with an iPad. Both daughters have also made extensive use of FaceTime to stay in touch with their many friends.

When “Dad Academy” began, our older daughter read aloud the Preamble to the Constitution of the United States of America (“Constitution”). We then proceeded to work through much of Article I, establishing the nature and role of the House of Representatives (“House”) and the Senate. After a brief foray into Article II and the qualifications for the presidency, however, it was clear their doodling minds were wandering.

As a result, I shifted gears and walked them through the scenario I detail below: what would happen as of 12:01 pm on January 20, 2021 if there were no November 2020 elections for the House, Senate, vice president and president. I had tweeted my initial thoughts on Wednesday, but as I sketched it out—much to their delight, I am pleased to report—I realized I had forgotten a crucial element. After a quick check of this year’s Senate elections, I made the appropriate revisions on Twitter and, more importantly, the white board.

This quickly devolved into both daughters sketching out their own mind-bogglingly grin doomsday scenarios on the white board, all of which seemed to end up with 50,000 or 100,000 survivors living on Antarctica and dividing up only whatever food they could carry with them. Hey, they were using their imaginations, thinking about geography and doing arithmetic, so I was not complaining.

After an hour-long break, we reconvened to resume learning about basic statistics. After quickly reviewing frequencies, range, mode, median, mean and a few statistical distributions, I decided to change my lesson plan again. Rather than begin to discuss relationships between variables, I put my doctorate in epidemiology to good use and explained “sensitivity” and “specificity” of testing for some condition like, say, the novel coronavirus. They quickly grasped the underlying idea:

If you divide True Positives by the sum of True Positives and False Negatives you get sensitivity: the percentage of persons who truly have the condition who test positive for it.

It is nearly impossible to have a test be both 100% sensitive AND 100% specific because of the likely gray area between an extremely tight case definition (e.g., you must meet all 10 criteria)—which gives you higher sensitivity—and a relatively looser definition (e.g., you only need to meet five out of 10 criteria)—which gives you higher specificity. For a host of reasons I will not review here, mostly related to accuracy of categorization, epidemiologists generally prefer to have the specificity of a test be as close to 100% as possible, even at the risk of lower (by which I mean, say, 90% instead of 95%) sensitivity.

And with that—and a review of some of our older daughter’s algebra problems—school was out for the day.

Ohio was supposed to hold its 2020 Democratic presidential primary on March 17. It was postponed until June 2, however, due to concerns over spreading the novel coronavirus. Five other states have done the same thing, meanwhile, leading to speculation President Donald J. Trump may attempt to postpone—or outright cancel—the November 2020 federal elections (Congress, vice president, president).

Leaving aside whether such an action is even feasible—for one thing, while under Article I, Section 5, the House and Senate have broad authority over the timing of elections to their respective houses, those elections are actually administered by each individual state. The same is true for elections for vice president and president—and that is before considering that the Electoral College essentially mandates 51 distinct elections, one within each state and the District of Columbia.

But let us assume, as a kind of thought experiment, it actually would be possible to delay these elections. So long as the presidential and vice-presidential elections were held long enough before December 13, 2020—the first Monday after the second Wednesday in December, when electors are required to meet in their respective states to cast their presidential ballots—there would be more than enough time to swear in a president the following January 20.

However, if these elections simply never occur…well, this is where two sections of the Constitution and the Presidential Succession Act of 1947 (PSA) come into play.

In other words, barring a non-starter Constitutional amendment, an Act of Congress (hard to see Democrats going along with this) or a very-unlikely ruling by the Supreme Court (the Constitution explicitly states that as as of 12:01 pm on January 20, 2021, Trump and Michael R. Pence would no longer be the president and vice president of the United States, respectively.

And for the previous 17 days, there would also be no Speaker of the House because the term of every one of the 435 members of the House would have ended at noon on January 3, 2021.

I note at this point that Amendment XX, Section 1 ends with “the terms of their successors shall then begin,” so it is just barely possible an argument could be made the terms of the president, vice president, House members and Senators would not end because there are no successors. Without a successor, there are no occupants of those offices, effectively shutting down the federal government.

Here is the counter-argument, however, and where things get really interesting.

There would still be a Senate because only 35 of the 100 Senators are reaching the end of their terms this year.[1] Fully 65 Senators will still be serving at that time: 35 Democrats (including two Independents, Bernie Sanders of Vermont and Angus King of Maine, who caucus with the Democrats) and 30 Republicans.

That is right: rather than the current Senate, which has a 53-47 Republican majority, this “abridged” Senate would have a 35-30 Democratic majority. And the longest-serving Democratic Senator—who is not up for reelection in 2020—is Patrick J. Leahy of Vermont, who was first elected in 1974!

And that is because of what I had forgotten on Wednesday: under Amendment XVII, governors are empowered to appoint a replacement for a Senator who leaves office before the end of her/his term—just about always a member of the same party as the governor.

In this scenario, these governors immediately appoint replacement Senators as soon as those 35 Senate terms expire at noon on January 3, 2021…and they are sworn in immediately. Traditionally, the vice president swears in each new Senator, so that may be the fly in the ointment here. Presumably, though, in this unusual circumstance Chief Justice Roberts could swear in all the appointed Senators at one time, somewhere in Washington, DC.

As for the governors themselves:

Excluding the three states where a gubernatorial election is being held (or not…as our younger daughter pointed out, why would there be elections for governor if all the federal elections were postponed?), the new Senate would now include:

This is still a bare 49-48 Democratic majority, making Leahy the 46th president.

IF gubernatorial elections are held in Delaware and New Hampshire this November, though, it is very likely the incumbent wins both races, which adds one new Democratic and one new Republican Senator, for a bare 50-49 Democratic majority…and President Leahy.

That leaves it all up to Montana.

IF there is a Montana gubernatorial election this November, the Republican nominee would likely be favored to win. In that case, we would wind up with a 50-50 tie in the Senate. And with no vice president to break the tie, it is not clear whether Leahy or Republican Charles R. Grassley of Iowa, who was first elected in 1980. Of course, if a Democrat were elected the next governor of Montana, that would result in a 51-49 Democratic Senate majority…and President Leahy.

Perhaps the nod still goes to Leahy in the case of a 50-50 Senate split, as the longest-serving Senator overall. Perhaps there is something like a coin flip. Or maybe these two men—who have served together in the United States Senate for 40 years and are around 80 years of age—decide to serve jointly, with one as president and one as vice president.

The bottom line, though, is that it is far more likely than not that if there are no federal elections this November, Democratic Senator Patrick Joseph Leahy of Vermont would be sworn in at 12:01 pm EDT on January 20, 2021 as the 46th president of the United States.

I am a data geek, writer, investigator and film noir devotee with academic training in political science (Yale BA, Harvard MA), biostatistics (Boston University SPH MA) and epidemiology (Boston University SPH PhD). In January 2021, I finished writing Interrogating Memory: Film Noir Spurs a Deep Dive Into My Family History...and My Own for which I seek a publisher. In Chapter 6: So...What Is Film Noir, Again?, I analyze my film noir database, which contains 4,825 titles. My musical holy trinity is Genesis, Miles Davis and Stan Ridgway. I am a liberal Democrat who understands a thriving democracy requires at least two mature political parties. I grew up just outside Philadelphia, and I live just outside Boston, where my wife and daughters keep me happy, sane and grounded. Please ask me anything else you want to know. View more posts