I have settled upon a term (and possibly a book title) for what I describe doing here, here and here.

The term is “interrogating memory.”

As I write this book (tentative title: Interrogating Memory: Film Noir Spurs a Deep Dive Into My Family History…and My Own), I have spent a great deal of time trying not only to probe my memory and those of surviving friends and relatives, but also to independently verify those memories, those stories I have told and retold myself for years.

Just bear with me while I interrogate some of these memories.

At least four of those memories, which I am having difficulty confirming, involve fires.

Now, I know for a fact that our downstairs playroom caught on fire (on a spring weekend night in 1973?), not long before my sister Mindy moved to the residential school for students with developmental disabilities where she has lived since 1974.

I know this not simply because I lived through it: I was asleep when Mindy was suddenly standing in my doorway (the playroom was directly below her bedroom), I smelled the smoke and felt the heat, I woke my mother (my father was still out…almost certainly playing cards), and then we were standing outside (I think we had our keeshond Luvey at that point, which would definitely make it 1973) watching the firemen at work, and then we tried to get a room at a local motel but they refused us either because they did not take pets or because Mindy unnerved them or both.

I am pretty sure I was in first grade and there was no school the next day, all of which fits with a weekend in the spring of 1973.

I know this also because a few years later, all of the students at Lynnewood Elementary gathered in the auditorium for a fire safety assembly. The fire official who spoke showed a film showing recent local house fires. I was sitting next to my great friend who lived a few houses away from me. At one point, she nudged me, pointed to the screen and whispered, “Matt…that’s your house!”

So…that happened, even if I can find no record of it on Newspapers.com. Besides that lack of contemporaneous documentation, this is unfortunate for another reason: precisely how that fire started remains a mystery, another story I have told myself for years (supposedly, my mother had left a hair dryer—one where you pull the heating unit down over your head—turned on in that playroom, expecting my father to turn it off when he came home, which he did not do until the wee hours of the morning, by which time it had—what?—overheated and caught fire?—the story has never quite made sense).

Other stories about childhood fires I cannot confirm are:

A fire destroyed all of the adoption records at the agency which arranged my adoption.

Now that I have learned that my adoption was arranged by a private attorney named Herman Modell, this seems extremely unlikely, unless the fire occurred at the Philadelphia offices of Modell, Pincus, Hahn & Reich…or at the offices of the attorney engaged by my genetic parents, whose identity I cannot confirm (though I have a possible suspect). For now, I can find no record of such a fire on Newspapers.com.

It is very possible that I created this memory by conflating other memories, or that my mother was engaging in a bit of…misdirection…to keep me from questioning the story of my adoption too closely. I ascribe no malice to her, only a kind of understandable maternal anxiety at the thought of somehow losing her adopted son.

The original location of my father’s carpet warehouse was destroyed in a fire, and there is reason to believe my father was responsible (the word you want here is “arson”) perhaps in partnership with another male relative.

It is an established fact that John Rhoads Co., founded in 1886, was operated by my father following the death of his father Morris in November 1954 and, especially, his Uncle Jules in November 1958. He operated this business with his mother Rae until her death in January 1972. Through at least March 29, 1972 (the last day on which I can find a newspaper advertisement on Newspapers.com), the business was located at 4157 Lancaster Avenue in West Philadelphia. By October 31, 1974, John Rhoads Co. had moved to the store I remember playing in as a child (all those rolls of carpet made for excellent climbing and exploring!): 7025 West Chester Pike in Upper Darby, literally steps from the Philadelphia city line. The latter advertisement, which ran at least three other times through the end of 1974, announces that the business was “formerly” at the Lancaster Avenue address, suggesting that the new location opened earlier that year. 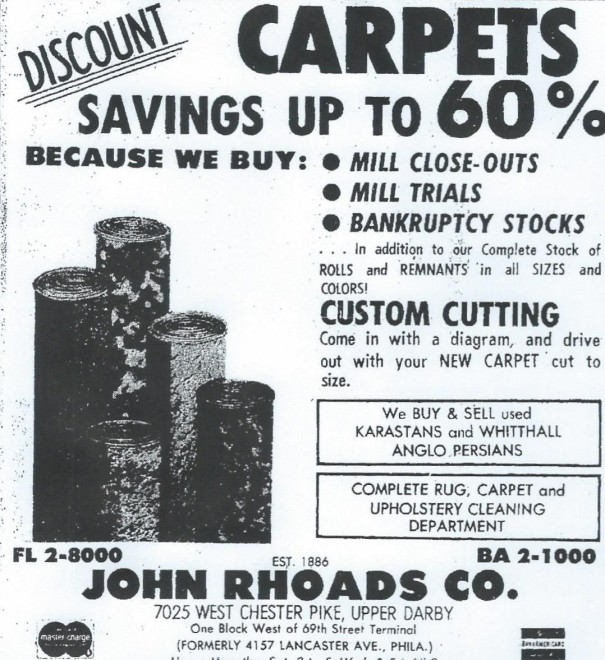 I have no memory of when—or why—the business moved locations. It may simply have been that after his mother died, he decided to move his business closer to his Havertown home.

A fire of that magnitude, to an established business, should have merited at least some newspaper coverage. It may simply be that Newspapers.com has not yet uploaded the correct issues of the Philadelphia Inquirer and Philadelphia Daily News, and I need to do a more thorough search elsewhere.

I would just note here that the statute of limitations on arson in Pennsylvania is five years.

Nonetheless, the fact that I am not yet able to confirm these two childhood memories/stories of fire had me seriously questioning the most elusive memory of all:

When I was around four years old, I had a great friend who lived on a nearby street. The street ran up a short incline to a cul-de-sac. His house was on this cul-de-sac, at the top of the hill. One day, he was playing with matches, and he severely injured himself, to a point where I never saw him again.

This tragic cautionary tale has been lurking in the darkest recesses of my memory since I was very young. I don’t know that my mother and I ever spoke about it (other than that one time, obviously), but I would usually think about this story every time I drove by the bottom of that hill.

And I had come to believe that it was more likely than not that, like the tales of burnt adoptions records and arson outlined above, this was a story I had either invented or mis-remembered, or it was a story my mother had told me to keep from playing with fire as a young boy.

But as I interrogate each of these memories, I decided last night to do a little digging on Newspapers.com, first confirming that name of the street on Google Earth.

Literally, this was the first story that came up on my search, from the Philadelphia Daily News of August 10, 1973 (pg. 7):

I was stunned as I read the full story (which you can read here), realizing that but for the exact location of the house (I was one house off) and the cause of the fire (father’s cigarette lighter), my memory was remarkably accurate.

The only other mention of Mr. Weisz I can find[1] describes how the boy, now 21, is a paraplegic receiving regular treatment at Mercy Catholic Medical Center, Fitzgerald Division, in Darby, PA. Having been there for 10 months, he had read that his favorite rock band, Boston, was going to give a concert in Philadelphia. Long story short, Sister Mary Antonita Tobin wrote to Electric Factory Concerts, requesting an autographed photo of the band.

They visited for about 20 minutes before the members of Boston went to visit other patients in the pediatric ward.

Here is what Mr. Weisz had to say about it.

“I never expected this to happen. […] Their music means everything to me because they have integrity and everything they say comes from the heart.”

It is remarkable what you can learn (good and bad) when you interrogate your memory.