In response to widespread social distancing being used to slow the spread of the novel coronavirus COVID-19, I plan to increase the frequency of my posts. And with the 2020 Democratic presidential nomination contest having effectively ended, I will not post nearly as often about American politics. Rather, I will describe how my family and I are dealing with the crisis, while presenting what I hope will be entertaining stories about…well, anything.

My wife Nell—a former elementary school teacher who now works part-time as a children’s librarian at a local Catholic school—saw this coming the previous week. Knowing we would need to implement some classroom structure for our 4th– and 6th-grade daughters, we immediately took the following steps:

We divided the “school day” this way because while Nell is a morning person, I am an extreme night owl. Since I was laid off from my last professional salaried position in June 2015—and especially after I declared myself a writer in July 2017 and launched my “interrogating memory” book-writing project—I have maintained a distinctly counter-cyclical schedule. Basically, once the household quiets down around 11 pm—and after I have finished cleaning the kitchen and taking out any trash and/or recycling—I settle down at the desk in my home office for a few hours; this is why I publish most posts at around 3 or 4 in the morning EST. Following some quiet down time, I go to sleep close to dawn, awaking well past noon. There are exceptions, however. I awake at 7 am on Tuesdays and Thursdays to take the girls to school, allowing Nell to go to work. After taking the dog to the park for 20 or 30 minutes—often bathing in the upstairs walk-in shower when we return home, though, I get back in bed for a few hours until I need to pick up the girls from school…though I spend way too much of that time reading on my iPhone.

Still, this meant that I was already working at home. With Nell working just two days a week, this is far less of an adjustment for us than it might otherwise have been.

Meanwhile, putting my advanced degrees in political science and applied math (biostatistics, epidemiology) to good use, I decided to devote an hour each day to a general introduction to politics and government and an hour to a general introduction to statistics. That is, from Monday to Thursday. On Fridays, I plan to do something different: discuss the history of film noir, or watch a documentary about Hedy Lamarr, or something equally offbeat but still educational. 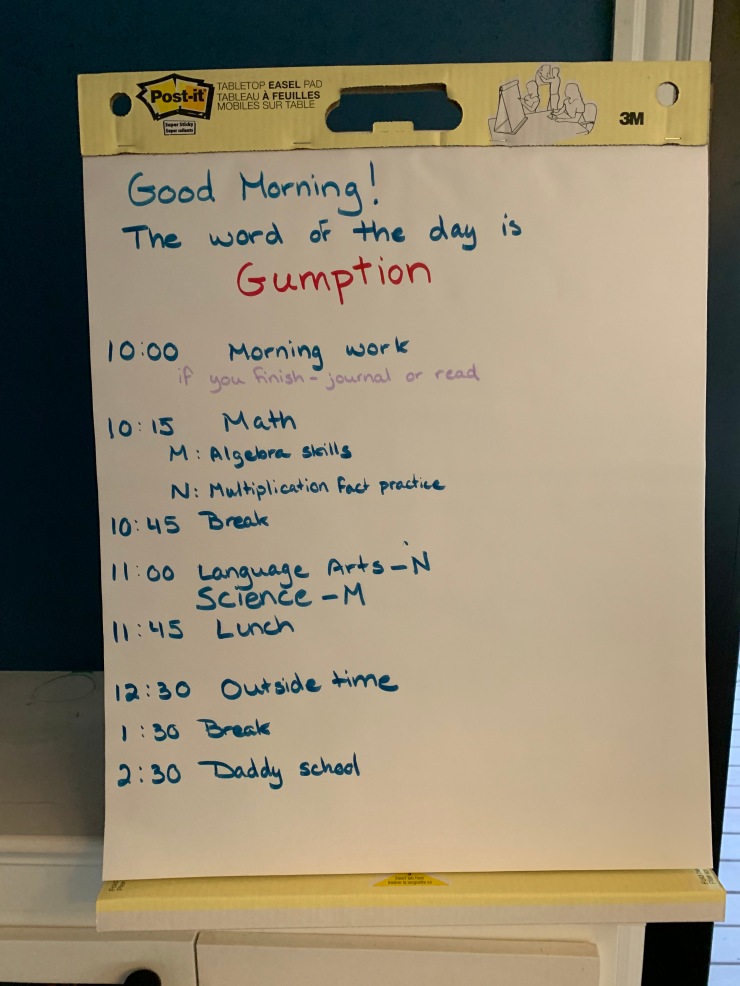 According to Nell, the girls had very much enjoyed their first morning of home-schooling. In fact, given the chaos that has recently descended upon the Brookline public elementary schools (e.g., two principals recently resigned in protest, even as the school district is negotiating a new teachers’ contract), they may learn more in these few weeks than they might otherwise have. I do not mean to disparage the quality of teaching in the Brookline public schools, which is generally very high. Our younger daughter has attention deficit disorder and a yet-to-be-formally-diagnosed learning disability, but with her school-based IEP (individual enrichment program) she has advanced by leaps and bounds; our older daughter is a voracious reader and diligent student, so she could probably thrive anywhere. It is just very difficult to teach and learn effectively in elementary schools with shaky leadership.

When it was my turn to teach, I used this document as a guide to begin sketching out the notion of politics as power: who has it, who decides who has it, and for how long. The section headings suggest the path our conversation took:

After an hour-long break, we reconvened—even as our younger daughter was fading somewhat—and I started talking about statistics, which I described simply as a way to describe a lot of information with only one or a few numbers. These latter sessions are far more interactive. Using a sheet of data about the presidents of the United States—year he first took office, length of term, age when took office, height and party affiliation (labeling Andrew Johnson a Democrat for simplicity), we focused on the most basic statistic—counts, also known as frequencies; this led to the idea of a variable, as opposed to a constant. They genuinely enjoyed seeing how old and how tall the various presidents were—and learning that about two-thirds of them were taller than my five feet, 9¾ inches. 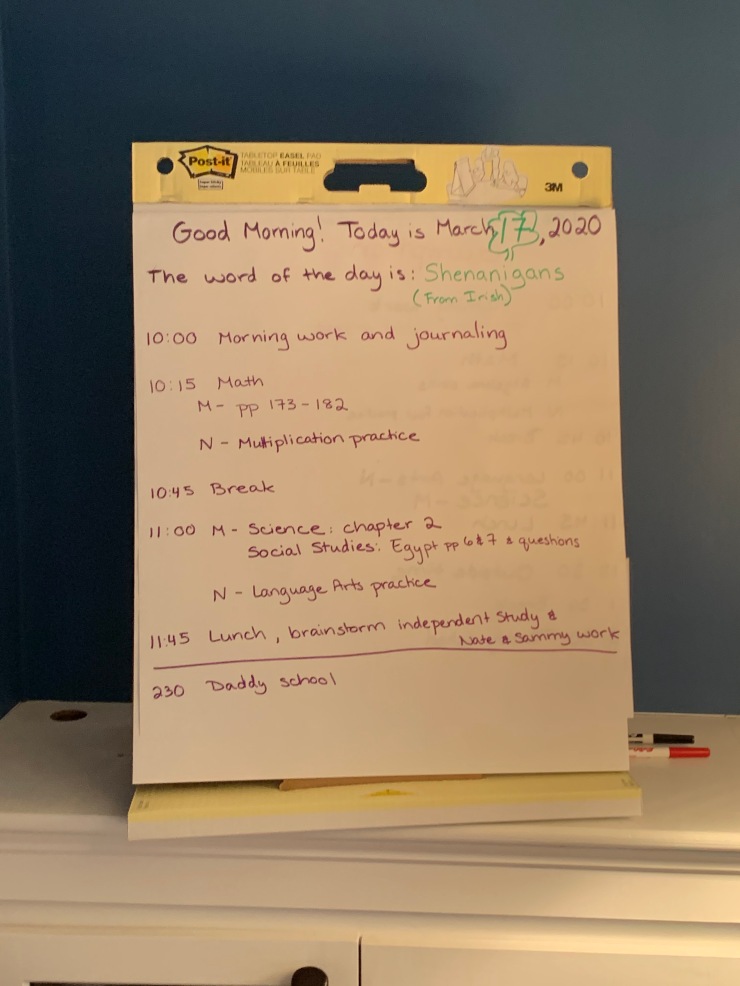 When “Daddy school” started, we briefly reviewed what we had learned on Monday, then returned to Ancient Greece and Aristotle’s six types of government. This easily filled half of our time before we turned to a broader discussion of two types of modern governments: liberal democratic and authoritarian. The former we grounded in the social contractand John Stuart Mill’s “harm principle;” I pulled out my old paperback copy of On Liberty to read the key passage directly. We drew a distinction between classical liberalism (though I did not use that phrase; as Nell has pointed out more than once, these are not 20-year-old college students) and libertarianism. We then dipped briefly into ideology, contrasting liberalism with nationalism and fascism.

In the “applied math” class, we reviewed frequencies before turning to measures of central tendency (without using that term): mode, median and mean; we also defined range as the arithmetic difference between the maximum and minimum values. The president dataset was once again up to the challenge. And our older daughter got to use the white board to practice adding more than two numbers of two or more digits as well as long division.

When “Daddy school” ended, I ventured out into the world, stopping at our local CVS to pick up prescriptions for Nell and a few other items before driving to a nearby Star Market. The bread shelves where practically empty, as were most of the frozen vegetable freezers, though I was still able to find broccoli and spinach. Neither here nor at CVS could I find a single bottle of rubbing alcohol or can of Lysol disinfectant for our downstairs neighbors. As I waited quietly in the checkout line, the quirky young cashier—who told us she was 19 years old and this was her first job—told the man in front of me the Star was now limiting customers to two containers per day for milk, eggs, and a host of other products. I was only buying one gallon of milk and no eggs, so I was in no danger there. And despite 19-year-old-cashier’s worry people would try to skirt the two-per-day limit or, worse, get into fights, everyone I encountered—which was not very many people—was patient and understanding.

When I came home, I tried to convince Nell to make the following day’s word of the day “rationing.” She chose a different word, though, as you will see.

Much later that night—err, early morning—I was unwinding to various YouTube videos on our big screen HD “smart” television. I have long been a fan of WhatCulture’s take on pop culture, but this video I watched—in which members of the staff present how they are responding to the need for social distancing—is especially remarkable for how they address the new reality both soberly and comically.  Malinda Kathleen Reese’s humorous take on how properly to wash your hands is in a similar vein.

This is what greeted me on Wednesday, March 18, 2020, when I came downstairs. 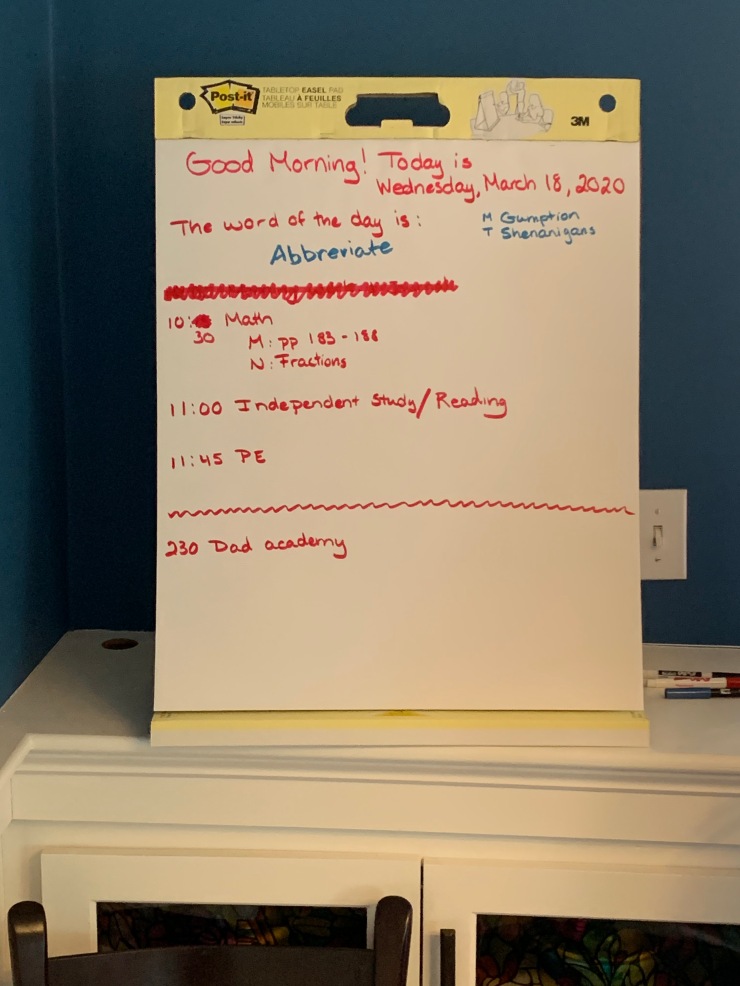 This was the first day the strain of being homebound began to show on our daughters. The older one—hormones coursing through her five-foot-six-inch frame—melted down in the morning over a range of issues; for the record, our younger daughter is only a few inches shorter. The latter daughter, meanwhile, perhaps responding to the fact one of her closest friends was having brain surgery that day, felt extremely nauseous.

Nonetheless, despite our older daughter now careening into wild hysterics over the Kool Aid man (your guess is as good as mine on this one), we soldiered on into “Daddy academy.” After another brief review, we turned to the American colonies in the 17th and 18th centuries. Specifically, we wondered how 13 disparate colonies, after overthrowing the “no taxation without representation” rule of tyrannical—Aristotle’s term for a solo ruler who makes rules solely on her/his own behalf—King George III of England could then fashion themselves into a nation.

It was while reading the first two paragraphs of the Declaration of Independence that our older daughter decided she wanted to visualize the word “usurp.” This is a fairly accurate depiction, actually. 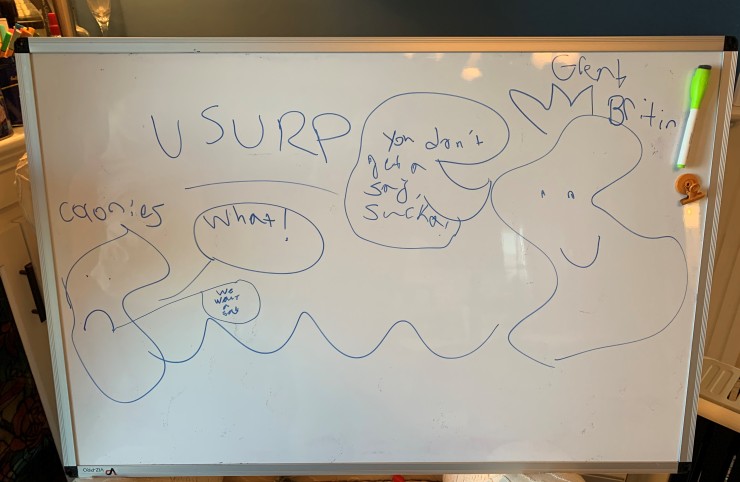 Careening rapidly through the Articles of Confederation, we came to the process of writing the Constitution of the United States between May and September 1787. And once again, our older daughter had some thoughts on two unfortunate historical realities of the document as originally drafted: a slave being considered 3/5 of a citizen for the decennial census, and the fact women could not vote until 1920.

Kool Aid man was not happy about these things. 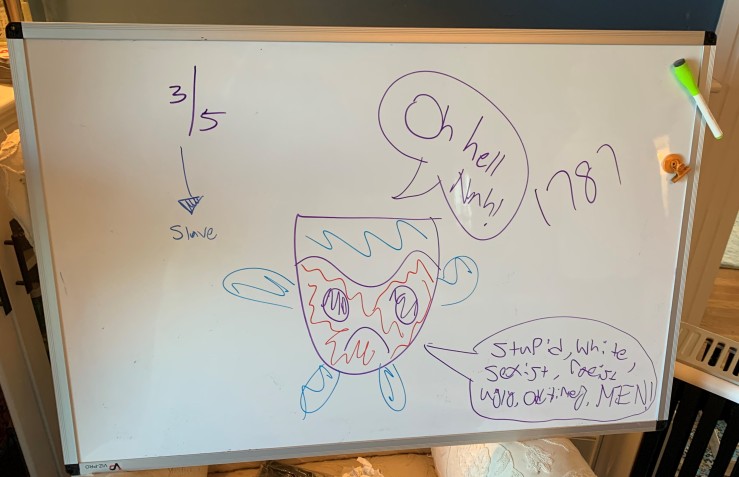 The applied math was far less dramatic. We reviewed range, mode, median and mean before turning to types of statistical distributions—how data are arranged from lowest to highest value—including normal, poisson and exponential. I also touched briefly on the idea of variance, or how narrowly or widely dispersed around the mean values of a variable are.

Later that night, this appeared on the white board—courtesy of Nell, who once made extra money drawing wall murals; as she says, she cannot draw something original, but she can copy anything. 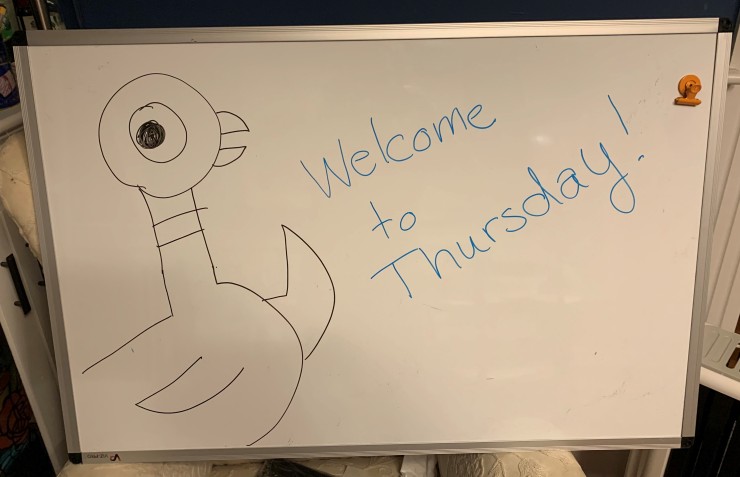 5 thoughts on “Dispatches from Brookline: Social Distancing and Home Schooling I”

Leave a Reply to Dispatches from Brookline: Home Schooling and Social Distancing IV – Just Bear With Me… Cancel reply